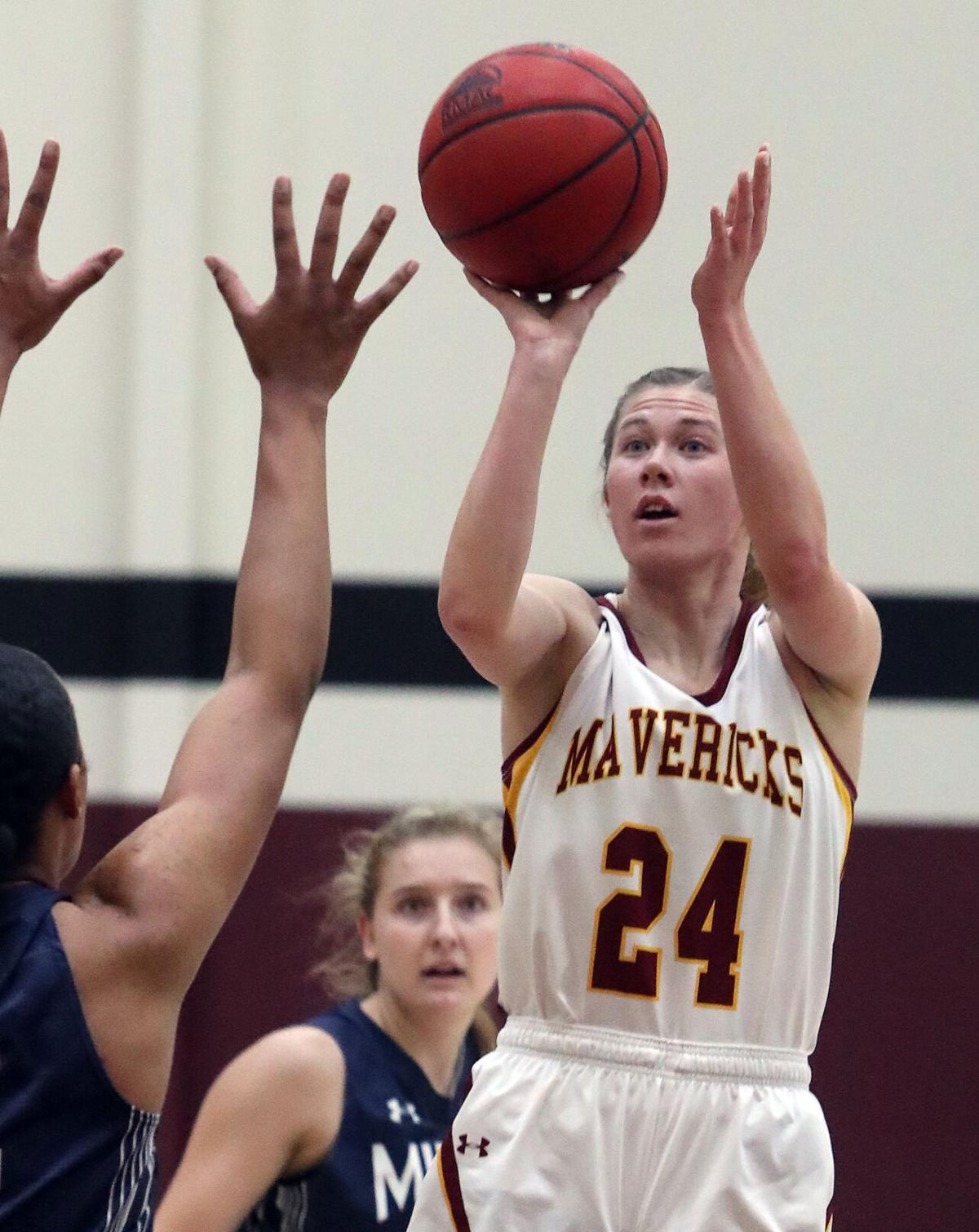 Colorado Mesa’s Kylyn Rigsby, 24, went back and forth when deciding whether to take advantage of an extra year of eligibility granted players this winter, but recently decided this will be her final season. The senior guard from De Beque was called “the complete Maverick” by her coach, Taylor Wagner, because of what she contributes both on and off the court. 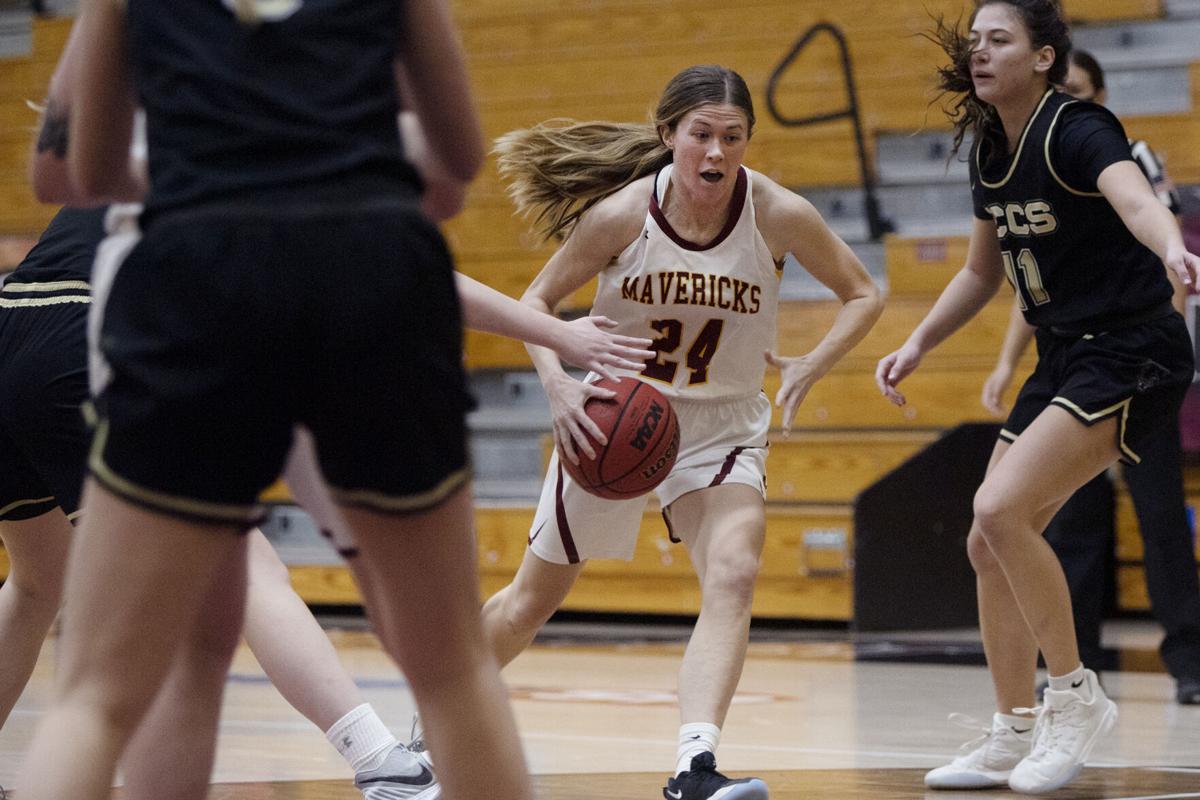 Kylyn Rigsby, 24, has expanded her game throughout her career, and earlier this season when both point guards were injured, the shooting guard helped run the point for the first time since she was in high school.

Colorado Mesa’s Kylyn Rigsby, 24, went back and forth when deciding whether to take advantage of an extra year of eligibility granted players this winter, but recently decided this will be her final season. The senior guard from De Beque was called “the complete Maverick” by her coach, Taylor Wagner, because of what she contributes both on and off the court.

Kylyn Rigsby, 24, has expanded her game throughout her career, and earlier this season when both point guards were injured, the shooting guard helped run the point for the first time since she was in high school.

Her coach calls her “the complete Maverick.”

That’s a pretty good summation of how Kylyn Rigsby will be remembered for her basketball career at Colorado Mesa.

The senior guard from De Beque — she played at Grand Valley High School — wrestled with the decision on whether to take the extra year of eligibility granted players this winter because of the COVID-19 pandemic.

Early on, she planned to play that extra year, but recently decided to say goodbye after this season.

“It was really hard for me to decide and I went back and forth for a long time,” Rigsby said after the Mavs’ final regular-season game, a 58-43 victory over No. 21 Western Colorado, knocking the Mountaineers out of the conference lead. “Just the school stuff, graduating, I’ll be really happy with what I’ve done for four years. I’m just really excited to see where my life takes me.

With her family in the stands, including her younger brother, Brennan, a standout player in his own right who led De Beque High School to a state title two years ago and has since attended Wasatch Academy in Utah, Rigsby scored 20 points on senior night, giving her 917 entering tonight’s RMAC quarterfinals against Metro State.

Her play helped CMU (13-7) secure the No. 4 seed in the conference tournament, so she’s guaranteed one more home game, at 5:30 tonight against Metro State (12-5). If their captain has her way, the Mavericks will play their way into next week’s West Regional at Brownson Arena.

“I keep telling them, you know, not just for me, but for Morgan (Myers-Pack) and Val (Desreumaux, both of whom are graduating), the more we win, the longer we get to play,” Rigsby said, “so just keep winning if you want to keep us around.”

Rigsby has grown from a lanky freshman who played about four minutes a game her first year, going 100 miles an hour, to one of the leaders on the floor, especially the past two seasons. She averaged about nine points a game as a sophomore, moving into the starting lineup, to 11.4 as a junior and 13.9 this season. She started all but one game the past three years, and was at her best in the RMAC tournament last season, scoring 62 points to be selected the tournament MVP.

Her energy level still knows no bounds, but this season she had to be the rudder when Dani Turner missed a month with a foot injury. CMU lost two of the first three games after Turner (and CMU’s other point guard, Natalie Bartle) was sidelined, but Rigsby was in double figures in all three. Then came the home game against Regis, when she went off for a career-high 34 points, and followed it up with 26 at Fort Lewis.

Always a threat from the 3-point line, she’ll pull up in transition, and has added a running one-hander and an unguardable Euro-step to her repertoire.

For all her success, she’s even happier when a teammate hits a crucial bucket or draws a charge. She’ll throw back her head and scream “YEAH!!!” clinching her fists and stamping a foot as she runs toward her teammates.

“The way I describe Ky is, Ky is the complete Maverick,” coach Taylor Wagner said. “By that I mean she does everything that a teammate would want, everything a coach would want. She’s just unbelievable. She guards, she scores, she’s a cheerleader. She loves and celebrates everybody else’s successes. And that’s the thing if I can describe Kylyn Rigsby, she is the complete Maverick.”

The night Brennan Rigsby Jr. and De Beque won the 2019 state title, Kylyn Rigsby and the Mavericks were hoisting the RMAC tournament championship trophy. A side note: the current boys coach at “The ‘Q,” Jake Higuera, was Kylyn’s high school coach at Grand Valley, where she was an all-state guard and the Western Slope League player of the year.

Rigsby has often talked about her love of playing in front of CMU’s fans, but in what could be her final appearance at Brownson, she won’t get that chance. The RMAC office determined no fans will be allowed at all conference championships because of COVID-19 concerns.

Rigsby might not get to wave goodbye to a full house at Brownson, but she’s left her mark on the program.

“Like I said, it was a really emotional time and decision for me,” she said, “but I just want to finish it out right and be the player that I want people to remember me for these four years.”

In Packers rookie Amari Rodgers, Randall Cobb sees himself — only better: ‘He has the potential to be way better than I was’

As rookies hit the field, Matt LaFleur says of Aaron Rodgers: 'We want him back in the worst way’