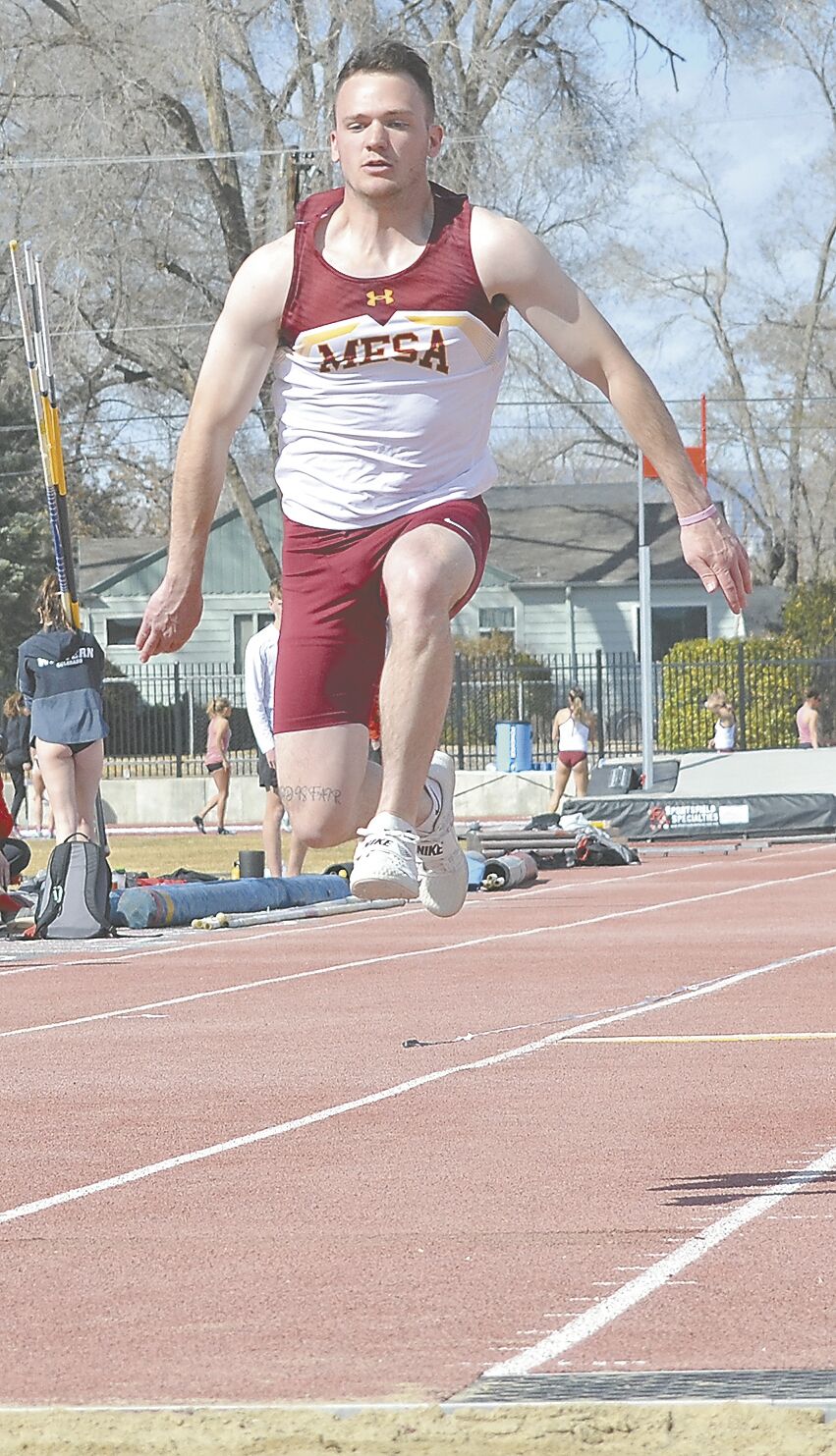 Colorado Mesa’s Gunner Rigsby, shown during a meet earlier this spring, broke his own triple jump record Sunday at the RMAC Championships in Pueblo and achieved an automatic qualifying standard for the NCAA Division II national championships.

Colorado Mesa’s Gunner Rigsby, shown during a meet earlier this spring, broke his own triple jump record Sunday at the RMAC Championships in Pueblo and achieved an automatic qualifying standard for the NCAA Division II national championships.

Gunner Rigsby broke his weeks-old triple jump school record Sunday in the finals of the RMAC championships in Pueblo, and in the process locked up a spot in the Division II outdoor nationals at the end of the month.

Rigsby, a junior out of Fruita Monument, uncorked a leap of 51 feet, 6.25 inches in the second round after fouling in the first round, and placed second to CU-Colorado Springs’ Dakota Abbott’s best jump of 52-1. They now have two of the top three triple jumps in the country and both automatically qualified for nationals May 27-29 in Allendale, Mich. CMU’s Spencer Purnell was third at 50-9.25, provisionally qualifying for nationals.

Rigsby, who transferred to CMU from the University of Colorado last year, triple-jumped 50-1.25 on April 10 at the Maverick Open, to move to the top of the Mavs’ record list before Sunday’s effort.

The CMU men had one individual champion on the final day of competition, Tony Torres, who won the 1,500 meters in 3 minutes. 57.22 seconds. David Cardenas, a Central High School graduate who runs at Adams State, won the 800 meters in 1:51.01, a provisional national time. Torres was fifth with a personal-best 1:53.08.

Hayden Riley set a school record with a distance of 53-5.5 to place second in the shot put, helping the CMU men place fourth with 91 team points. UCCS won both the men’s and women’s titles, with the men scoring 149.5 and the women 196.

The women’s team placed seventh with 54.5 points and was led Sunday by the relay teams. Haley Golden, Rachel Crutcher, Jordy Pittman and Sophia Lindauer placed second in the 4x100 in 47.2 seconds and the 4x400 team of Jade Wimmer, Golden, Lindauer and Amber Valdez was third in 4:02.31.

Sierra Arceneaux, the top seed in both the 100 and 200 meters after breaking CMU records in both events and provisionally qualifying for nationals in the prelims, did not run in the finals.

The women’s highest individual placer on the final day was Averie Griffith, who ran a personal-best 14.65 to place fourth in the 100 hurdles.

Colorado Mesa faces Adams State at 3 p.m. on Friday at Maverick Field in the semifinals of the men’s RMAC Tournament.

The Mavericks (8-1) are the No. 1 seed after winning the regular-season title last week, going undefeated in RMAC play at 5-0. Adams State (0-8) is seeded fourth.

Colorado Mesa beat the Grizzlies twice this season, 12-6 in Alamosa and 23-3 at home. Westminster, the No. 2 seed, plays CSU-Pueblo at 6 p.m.

The championship game is at 2 p.m. on Saturday.

The CMU women (8-4) are the No. 2 seed and play CU-Colorado Springs (8-3) at 4 p.m. on Friday at Regis in the semifinals. The teams’ regular-season game was postponed, and eventually canceled, because of COVID-19 issues in the Mountain Lions’ program.

The Rangers face No. 4 Fort Lewis at 1 p.m. Friday in the other semifinal. The women’s title game is at noon on Sunday.

The Mavericks’ only conference loss this spring came against Regis.

Valparaiso punter hoping to kick his way to the pros