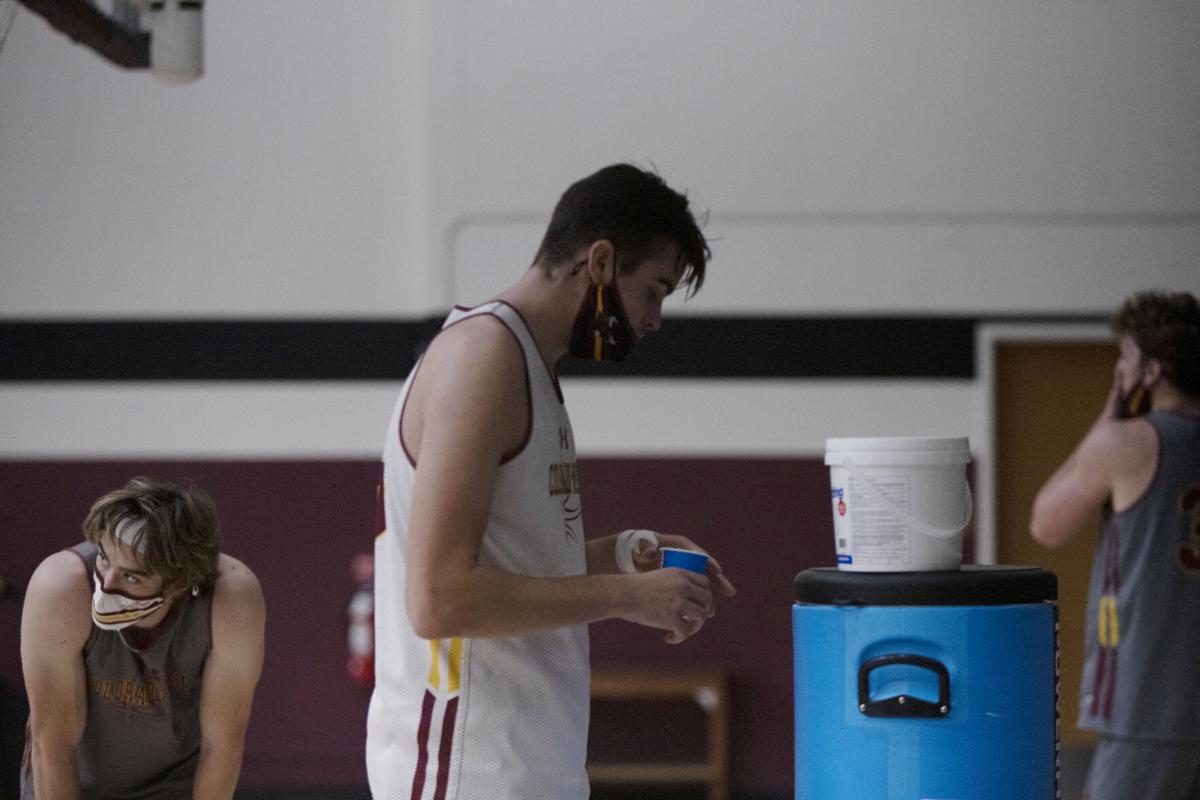 From left, Jack Moore, 3, Ethan Menzies, 23, and Cooper Mattson take a break during practice on Thursday. 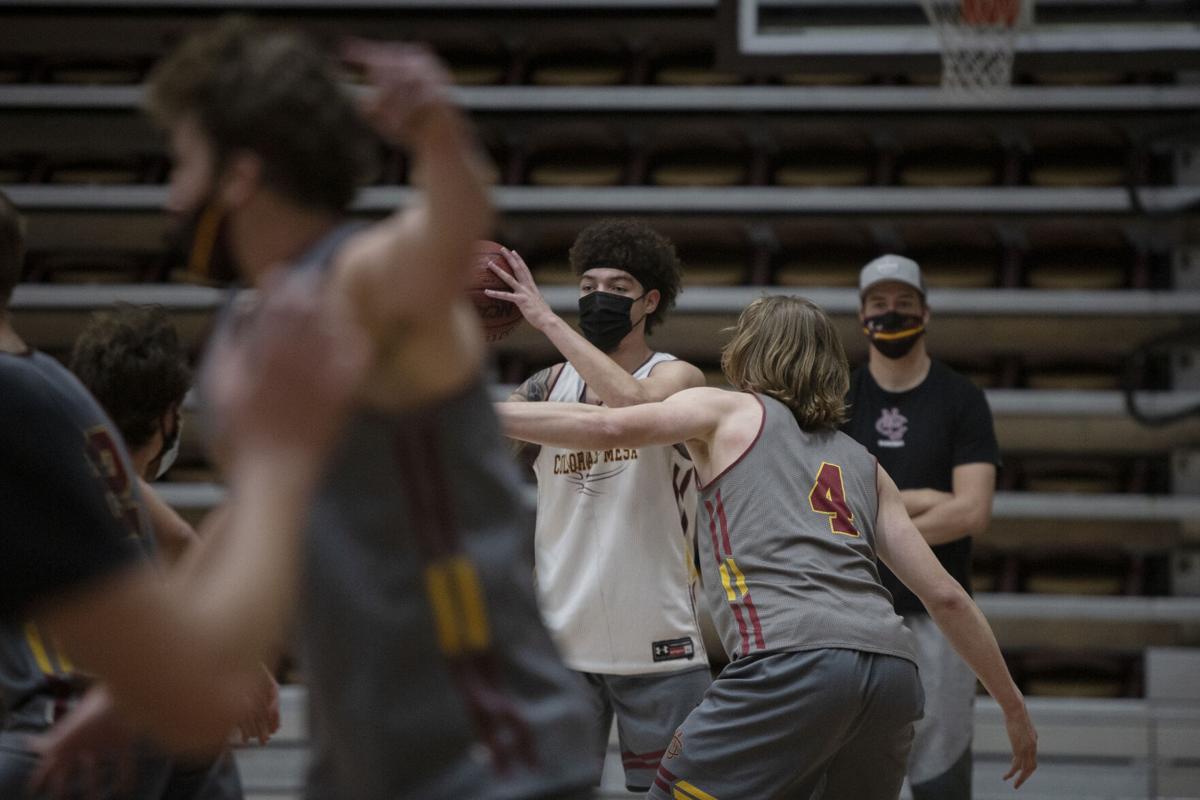 Georgie Dancer looks for a pass during practice on Thursday. 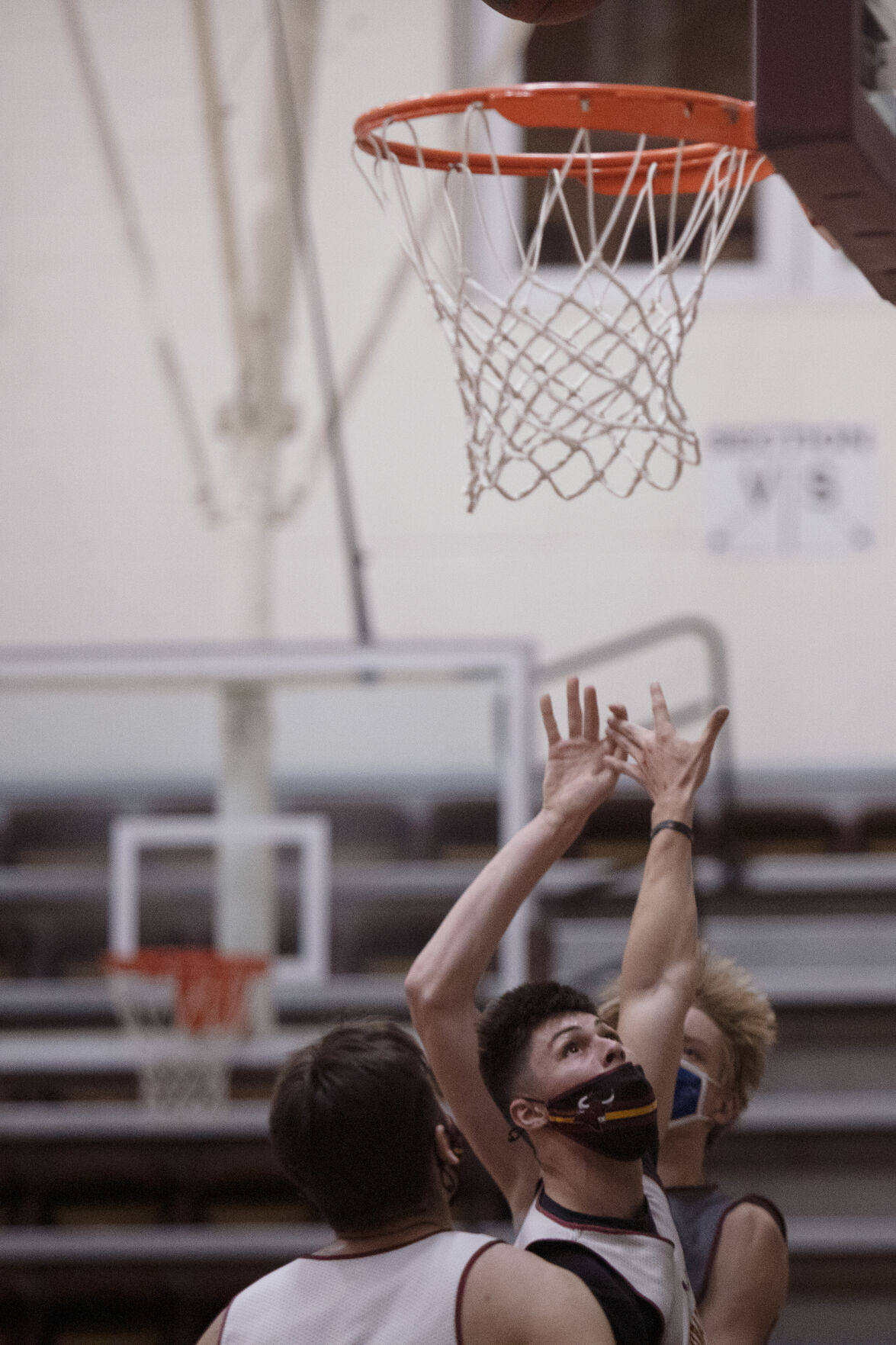 Colorado Mesa’s Jeret Schmelling, center, attempts to block a shot by Trevor Baskin, back, at practice on Thursday. With coronavirus cases rising across the country, RMAC basketball games in Colorado this winter will be played with the players wearing masks. 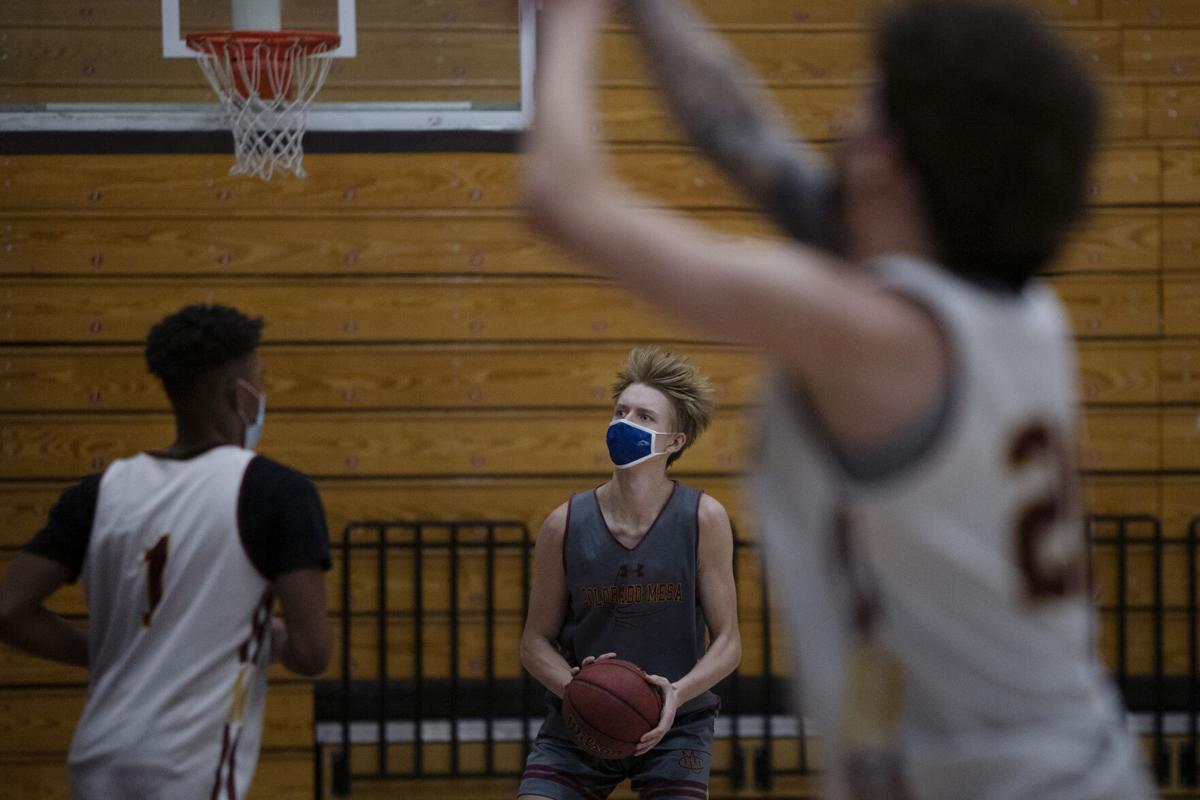 From left, Christopher Speller, Trevor Baskin and Georgie Dancer run a shooting drill during practice on Thursday. The Mavs returned to practice wearing face masks as Mesa County has moved into the Red “severe risk” level on the COVID-19 dial. Below, Ethan Menzies gets a drink as Jack Moore, left, and Cooper Mattson catch their breath during a break in practice.

From left, Jack Moore, 3, Ethan Menzies, 23, and Cooper Mattson take a break during practice on Thursday.

Georgie Dancer looks for a pass during practice on Thursday.

Colorado Mesa’s Jeret Schmelling, center, attempts to block a shot by Trevor Baskin, back, at practice on Thursday. With coronavirus cases rising across the country, RMAC basketball games in Colorado this winter will be played with the players wearing masks.

From left, Christopher Speller, Trevor Baskin and Georgie Dancer run a shooting drill during practice on Thursday. The Mavs returned to practice wearing face masks as Mesa County has moved into the Red “severe risk” level on the COVID-19 dial. Below, Ethan Menzies gets a drink as Jack Moore, left, and Cooper Mattson catch their breath during a break in practice.

These days, the game plan changes weekly, daily, even hourly.

With Mesa County placed in Level Red (severe risk) on the state COVID-19 dial, indoor events are canceled. Team sports are allowed in virtual settings or outdoors only, also in groups less than 10.

Because Colorado Mesa has a 5-star rating from the Mesa County Health Department, variances are in place that allow teams to practice, however indoor events are closed, even with 5-star ratings, according to the health department’s website. CMU President Tim Foster called a temporary halt to athletics on Nov. 8, but teams returned to the gym last week.

That, too, presented challenges. As cases of coronavirus spread throughout the county, some athletes tested positive and went into quarantine. Those who are cleared to practice are doing so wearing face masks.

“We’re slowly coming back,” DeGeorge said. “We’ve been cleared to practice as a team with masks and next week we should have everybody cleared and back.”

It’s been slow going for some players to get back in shape, depending on whether they were asymptomatic or had more serious symptoms of the virus.

“We’re trying to be real careful,” DeGeorge said, with precautions including no longer huddling as a team. “We’ve brought them back really slow and now they’re wearing masks (in practice) for the first time. We told them, ‘There’s no playbook to get you back in shape, you can’t tough through it. If you need breaks, you need to let us know.’

“So far they seem to be doing OK, we haven’t had any extreme fatigue. It’s more the masks, getting used to that.”

Teams throughout the Rocky Mountain Athletic Conference are going through the same thing, to varying degrees. The RMAC office built a conference-only schedule and gave schools the flexibility to move games as necessary.

CMU was hoping to move its Jan. 1-2 games to take the place of the Thanksgiving Tipoff, but one of those opponents, New Mexico Highlands, isn’t even allowed to practice. For the first time in years, there won’t be any games played at Brownson on the holiday weekend.

Teams usually have a light workout on Thursday morning, then players spend the rest of the day with their families who have come in for the tournament. That, too, will change, with players reminded not to venture outside their team family units.

“We’ve talked about it a little bit,” women’s coach Taylor Wagner said. “Some might have family visit, others are staying away. It’s going to be different for every kid, what they plan to do. The coaching staff is making sure everybody’s taken care of that day.”

The Mavericks did move those Jan. 1-2 games to Jan. 4-5, giving them a few more days after returning from the holidays, not only for practice, but for the required weekly COVID-19 tests.

Mesa also postponed the wrestling team’s annual Maroon and White scrimmage until early December, and the swim team’s A3 Performance Invitational was canceled this past weekend.

Some conference schools have announced they will not allow fans, at least through 2020, at athletic events. CMU is waiting until the first week of December to announce game procedures, based on conversations with the health department. DeGeorge said the athletic administration has been good about keeping coaches informed of developments without delving into what-ifs that could change at any time.

Rolling with the punches is more important than ever, and Wagner stressed all of the conference teams have to work together to have a chance to play.

“Everything is thrown for a loop,” Wagner said. “It’s different from the normal routine and getting in that groove. I just feel like the team that can make adjustments the most, those are probably going to be at the top of the standings when it’s all said and done. You have to be flexible and handle COVID stuff and all the other things that come up in a normal year.”

Other than golf and cross country, the RMAC hasn’t had any full seasons so far this school year, and it’s been a challenge entering winter.

“In regards to starting up winter sports, it’s very difficult,” RMAC Commissioner Chris Graham said in a phone interview this past week. “Many of us in sports administration have spent our whole life trying to make everything equal, every team, every student-athlete, every school. It’s the complete opposite.

“We have to have patience and grace with each other and acknowledge that in a health crisis, our local health departments and state health departments are going to tell us what’s best for each of us and the student-athletes, not the league and not the NCAA.”

The ability to play will rest with health departments in five states — Colorado, Utah, Nebraska, New Mexico and South Dakota — and the various counties where the 15 member institutions are located.

“Everything that we’ve done, not quite from Day 1, but from the early stages (of the pandemic last spring), was predicated on local health guidance,” Graham said. “The NCAA documents even refer to that, saying here are our recommendations, which we think are pretty solid, but at the end of the day, local health decisions will rule what you do, and that’s the position the presidents’ council has taken in my office.”

That’s never been more evident than in New Mexico, where teams aren’t allowed to play, and travelers from high-risk areas are required to quarantine for 14 days upon entering the state.

New Mexico Highlands has suspended all practice and competition. Men’s basketball coach Michael Dominguez, who played and coached at Mesa, said in a text message he doubts the Cowboys will play this season.

“I don’t want to not practice for 3 months and all of a sudden play games,” Dominguez said.

There is a bright side to being shut down — Dominguez and his wife, former CMU women’s basketball player Shanna Halalilo, welcomed a baby girl, Nevada Marie, two weeks ago, so he’s had plenty of family time.

Graham said if a school has concerns about sending teams to any venue, they can opt out of that game without penalty. If Highlands can’t play this season, games against the Cowboys will be declared no-contests.

“A coach, a program, a school can say I’m not playing because I’m not comfortable,” Graham said. “It will not be declared a forfeit, it will be a no-contest. The presidents supported it unanimously.

“We’re not going to listen to matters of gamesmanship. The bar is very low to meet a rationale for not wanting to play (in) all COVID-related matters.”

There’s no way to plan for the unforeseen in a pandemic, so it’s a case of making the best of what each day brings.

“In athletic administration, every day you finish it and wake up the next morning and COVID has literally put us back to Square One,” Graham said. “And we’re reliving it every single day.”