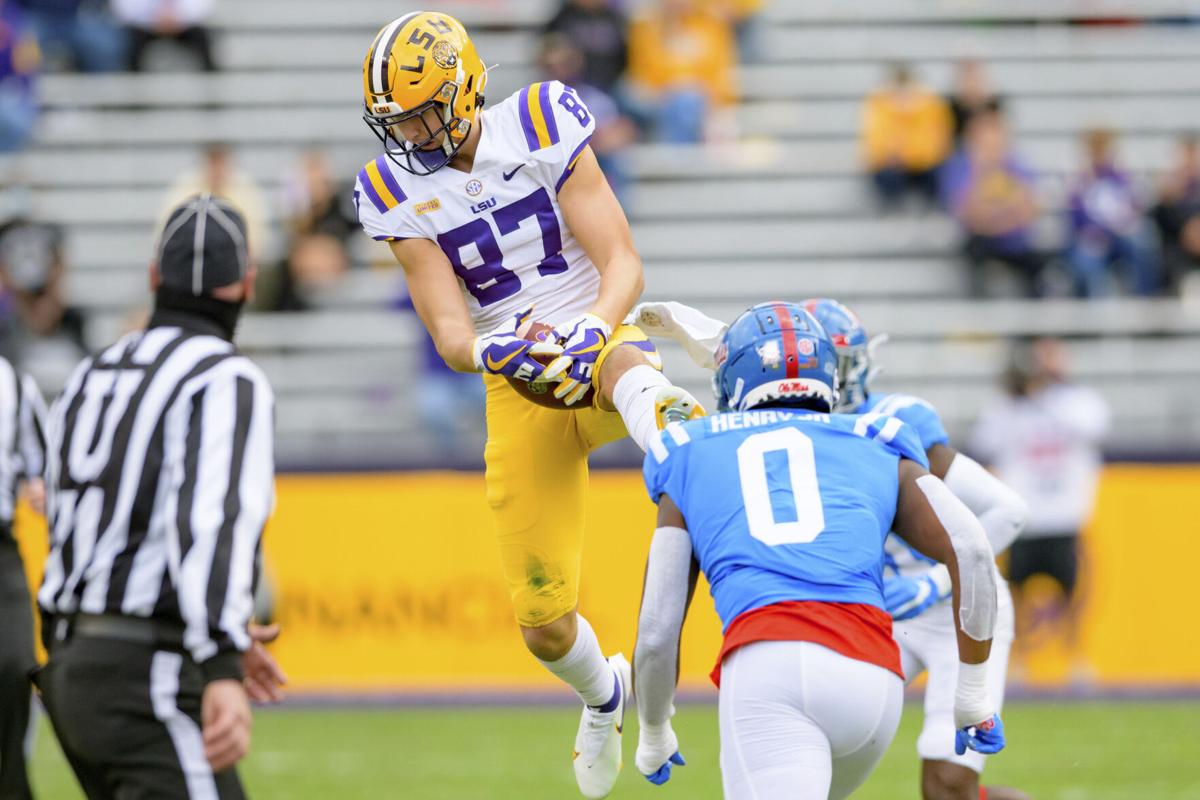 LSU tight end Kole Taylor, 87, makes a catch against Mississippi this past season. Taylor, who played at Central High School, became the subject of internet memes when a Florida player threw Taylor's shoe after making a tackle, drawing a penalty and setting up the Tigers' winning field goal. 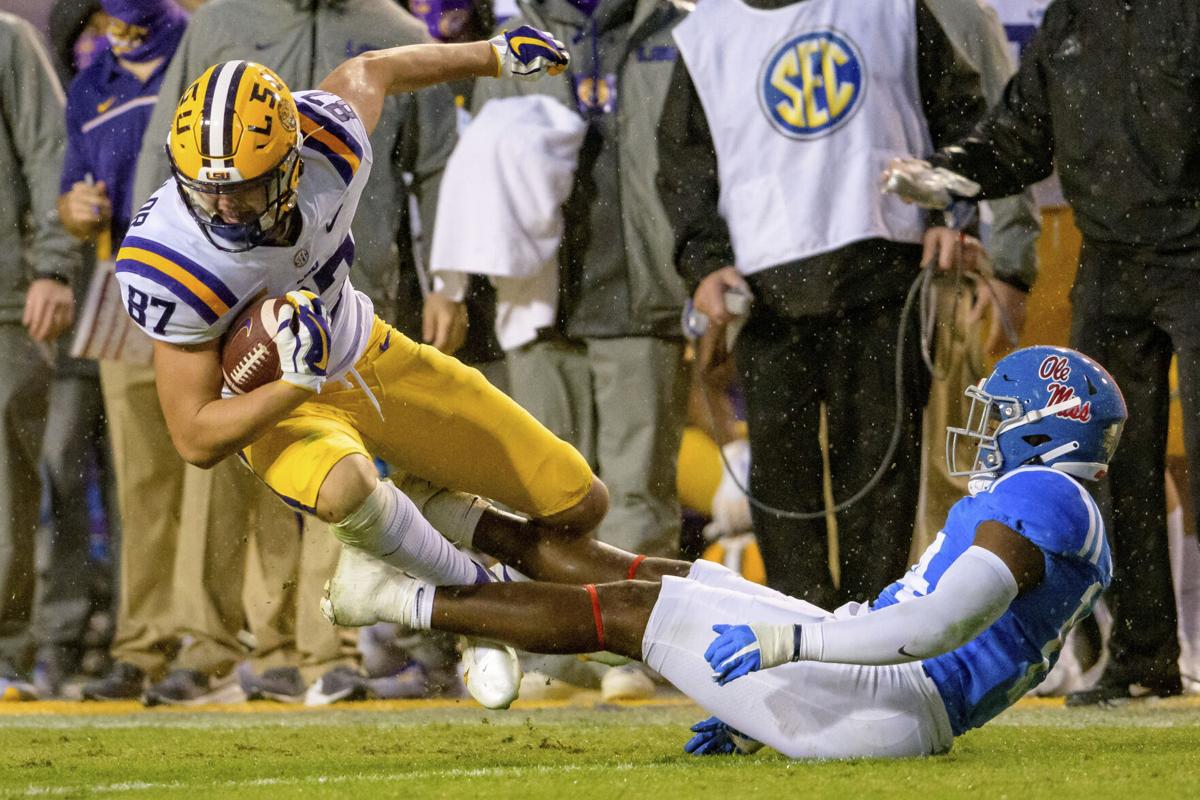 LSU tight end Kole Taylor, 87, gets taken down by Mississippi linebacker Daylen Gill after making a catch this past season. 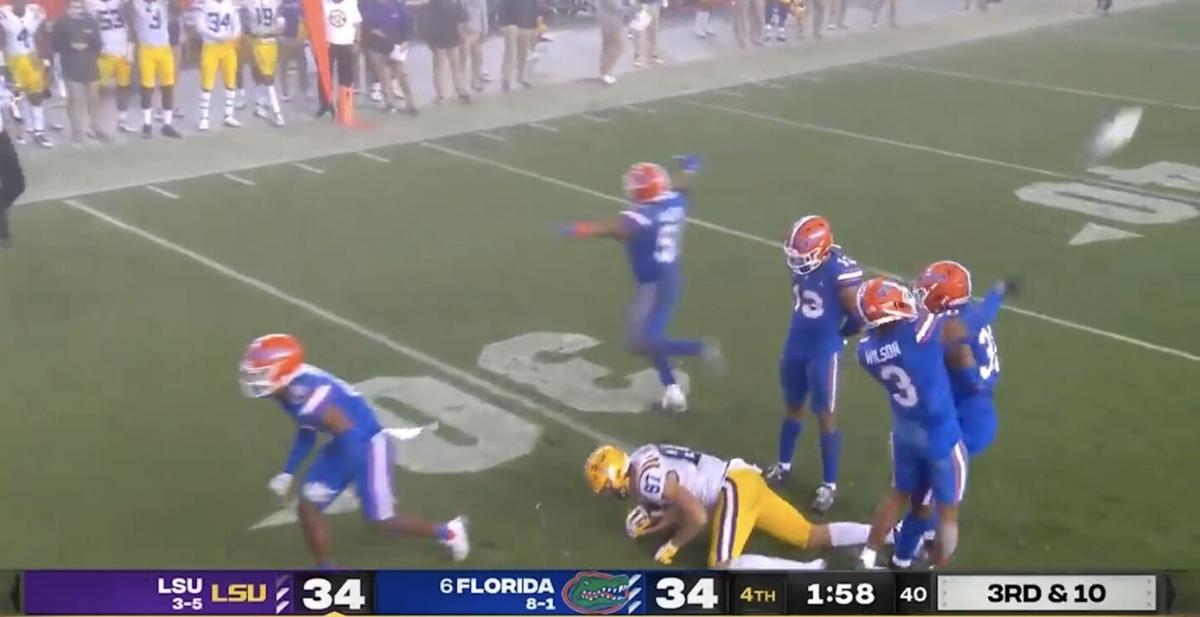 In this screenshot from ESPN, Florida defensive back Marco Wilson, 3, throws LSU tight end Kole Taylor’s shoe (the white flying object on the right) after tackling Taylor short of a first down. It drew a 15-yard penalty, setting up LSU’s winning drive. 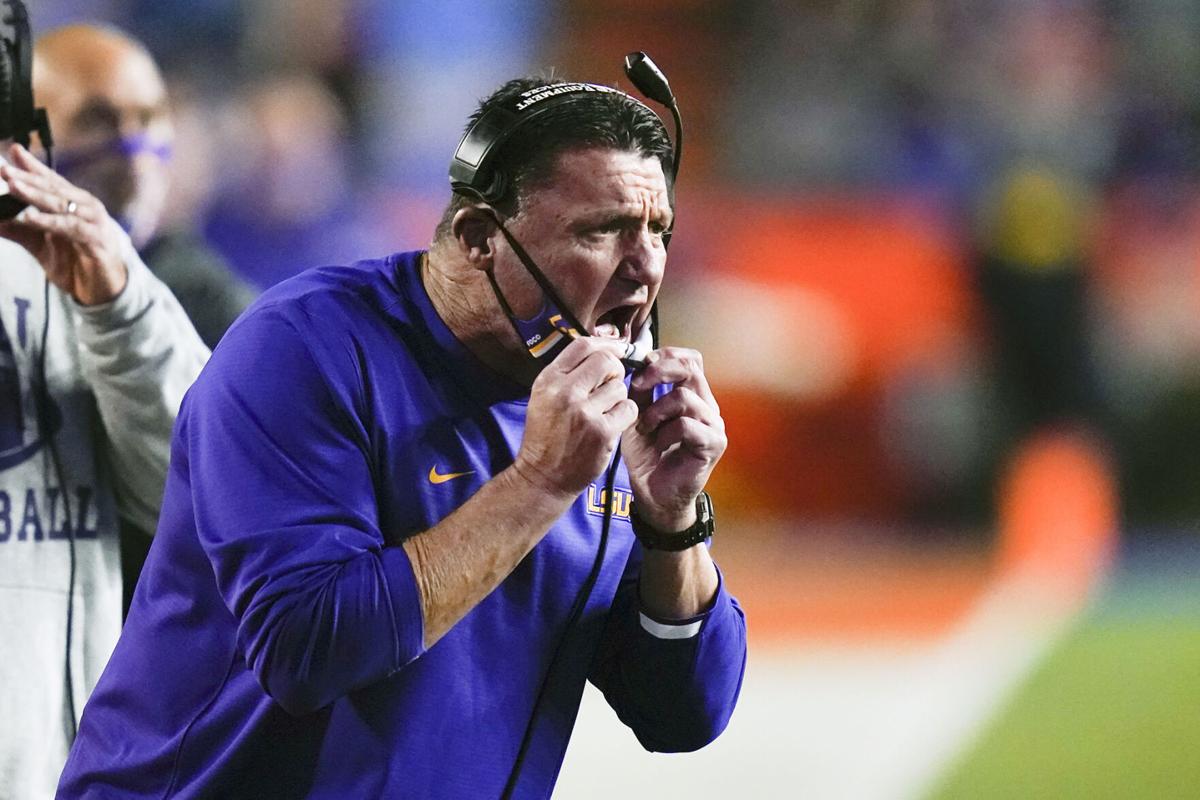 LSU coach Ed Orgeron has a distinctive voice, but Kole Taylor says it wasn't hard to understand his accent after a few days.

LSU tight end Kole Taylor, 87, makes a catch against Mississippi this past season. Taylor, who played at Central High School, became the subject of internet memes when a Florida player threw Taylor's shoe after making a tackle, drawing a penalty and setting up the Tigers' winning field goal.

LSU tight end Kole Taylor, 87, gets taken down by Mississippi linebacker Daylen Gill after making a catch this past season.

In this screenshot from ESPN, Florida defensive back Marco Wilson, 3, throws LSU tight end Kole Taylor’s shoe (the white flying object on the right) after tackling Taylor short of a first down. It drew a 15-yard penalty, setting up LSU’s winning drive.

LSU coach Ed Orgeron has a distinctive voice, but Kole Taylor says it wasn't hard to understand his accent after a few days.

“Who throws a shoe? Honestly!”

That line, delivered by Mike Myers in the movie “Austin Powers: International Man of Mystery,” could end up being linked to Kole Taylor’s college football career.

When the LSU Tigers visited No. 6 Florida on Dec. 12, it was the first collegiate start for the former Central High School tight end, an environment that was a far cry from his Stocker Stadium days.

He made a key block on the Tigers’ first touchdown, thrown by his roommate, fellow freshman and starting quarterback Max Johnson. Taylor finished the game with three catches for 11 yards.

More importantly for Taylor and the Tigers, LSU escaped the Swamp with a stunning 37-34 upset that spoiled the Gators’ playoff hopes.

Taylor’s most notable moment of his young college career came near the end of the game and was one of the most significant plays of the game. It was arguably the most hilarious play of the entire season.

With the game tied at 34-34 with 2 minutes, 6 seconds to go, LSU faced third down and 10 from its own 25-yard line. Taylor ran a short route to the flat on the left side of the field and hauled in a pass for 4 yards. He was met by two Florida defenders, unsuccessfully attempting to hurdle one, and was pulled down, bringing up fourth down.

“I was like, ‘It’s late. I’ve got to make a play. I’m going to try to go over him and hurdle him,’ ” Taylor said. “As I caught the ball, I turned up and I saw him just sitting there and a second guy coming in, so I didn’t try to jump as high as I could. I didn’t want to hesitate and the guy come in and just clean me. One guy pulled my left leg and the other guy came in and hit me from the back, so I kind of spun.”

What happened next was a moment that gained instant internet fame, inspired countless memes and went down as an infamous moment in Florida football history.

Taylor has never had issues with his shoes, never remembering an instance when he’s lost a shoe on the field. But that night, despite tying his shoes the same way he always has, one of his cleats came off as he was tackled.

“I didn’t even know my shoe fell off until I stood up and felt the cold grass,” Taylor said. “Then everyone was like, ‘He just threw your shoe,’ and I was like, ‘Wait, what?’ They say, ‘It’s 25 yards downfield.’

“I was thoroughly confused. I didn’t know what happened. Then I saw a bunch of flags and everyone was like, ‘OK, the drive’s going to keep going. We’ve got to move on to the next play.’ That was a big play, but there were 90 other plays in that game that we all had to make happen to win that game.”

Johnson scrambled for a first down on the next play, setting up Cade York’s 57-yard field goal with 23 seconds to go. Florida’s Evan McPherson missed a field goal on the last play, giving LSU the stunning upset.

Once he returned to the locker room, Taylor realized just how many of his friends and family — and how many college football fans — had seen the bizarre ending.

A common meme format he noticed was different edits splicing Wilson’s shoe throw with the December 2008 incident in which Iraqi journalist Muntadhar al-Zaidi threw both of his shoes at then-U.S. President George W. Bush. Even al-Zaidi shared a clip of Taylor’s shoe being thrown on his own Twitter account with the caption “O.M.G.”, cementing it as an iconic moment in the hallowed history of flying footwear.

“I try to stay off social media, but it was kinda hard to stay away from it,” Taylor said. “My phone was blowing up, but it was really fun to see all the memes and everything that was going around.

LSU’s success from 2019, which culminated with a national championship, would be difficult, if not impossible, to replicate after Heisman winner Joe Burrow and 13 other Bayou Bengals were drafted into the NFL. The Tigers began the season 3-5 as Taylor struggled for playing time.

By the end of the season, he was the starting tight end.

Taylor’s first in-game experience came in LSU’s second game on Oct. 3 at Vanderbilt, although he didn’t record a catch. He spent most of the season as a backup to fellow freshman Arik Gilbert. Taylor made his first college catch Nov. 28 against Texas A&M for three yards. After that game, Gilbert opted out of the season, ultimately entering the transfer portal.

Taylor hopes to go down in LSU lore for more than that time someone threw his shoe. He caught two passes for 22 yards — one going for 20 yards — and also made a crucial downfield block on Kayshon Boutte’s winning 45-yard touchdown late in the Tigers’ season-ending 53-48 win over Ole Miss.

He ended the year with six catches for 36 yards and hopes to cement his place in next season’s starting 11 with strong spring and fall camps.

“I think I’ll keep the same mindset that I’ve got to earn the starting job,” Taylor said. “I’m going to come in and work like I’m fighting for the starting job or I might become a backup. I’m going to keep my head down, work hard this offseason, get some work in with the team and, hopefully, we can have a really good season.”

"You actually get to understand him better once you're around him more. You kind of catch on to his accent and what he's saying. As far as a coach, I think he's one of the better coaches in the nation. He's more of a hands-on coach. I don't think a lot of coaches around the nation are. He coaches the D-line. He's with them every day. He's talking to the linemen who have to block those D-linemen about ways to counteract what they're doing. He's more of a hands-on coach than anyone in the nation. He's a great coach to play under."

If Kole Taylor continues to be the starting tight end for the Tigers, he hopes 2021 will give him his first opportunity to experience one of college football's most hallowed environments, Tiger Stadium — Death Valley — at full capacity, with 100,000 gold and purple-clad fans roaring.

"We allowed 25% capacity, so there were still 25,000 people there,” Taylor said. “The atmosphere is just awesome. I'm so excited to see it with 100,000, hopefully next year. It was really cool. You kind of just feed off the crowd's energy and you can feel them the whole time they're there throughout the whole game. It's a lot of fun to play in front of all them."

Life in the SEC

Once he arrived in Baton Rouge, Louisiana, Taylor realized just how different his new home — also the home of college football's reigning national champions — would be from his hometown, in terms of speed, strength, attention and humidity.

"Everything kind of sped up,” Taylor said. “It slowed down throughout the season as I got more comfortable, but everyone was just faster, bigger, stronger. The first time I really realized it was at practice. I came across to block and I hit this defensive end and he really just didn't move that much. I was like, 'Yeah, this is what I'm playing against. This is what I'm going to be going against every week.' That was kind of an eye-opener right there."